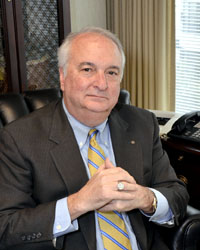 Attorney Nick Moraitakis is an Atlanta trial lawyer with over 30 years of experience.

After graduating from Emory Law School in 1977, Nick immediately began practicing law with a defense litigation firm in downtown Atlanta, which eventually became known as Fain, Gorby, Reeves & Moraitakis. Nick went on to spend the first 14 years of his practice with this firm and its successor, representing insurance companies and self-insured corporations in the defense of tort actions in courts throughout the State of Georgia. As a defense lawyer Nick tried in excess of sixty cases to verdict involving automobile and truck accidents, product liability, negligent security claims, slip and fall accidents and insurance contracts among others.

Nick also served as lead counsel in a highly publicized case against Atlanta Hospital. The case involved a doctor who was allegedly responsible for three deaths within a very short period of time. It was successfully resolved prior to trial based on negligent credentialing claims against Atlanta Hospital, which was investigated thereafter by the State Medical Review Board and eventually forced to close its doors.

In 1993, Nick and his partner Glenn Kushel began a plaintiff’s practice dedicated exclusively to the representation of individuals injured or killed as a result of medical malpractice, nursing home abuse, trucking accidents, automobile accidents, product liability, premises liability and other negligent and intentional acts.

Along with his partner, Nick successfully argued the case of Keenan v. Plouffe to the Georgia Supreme Court, which resulted in a landmark decision holding that a defendant physician, a faculty member of the Medical College of Georgia, was not immune from suit under the Georgia Tort Claims Act. Instead, the court held that the doctor could be individually liable and the case eventually settled for an amount exceeding seven and one half million dollars.

The firm also served as lead counsel in a significant case against the City of Atlanta, Marriott Hotels and a myriad of engineers and product liability manufacturers due to a sewer collapse under the parking lot of the Midtown Courtyard Hotel by Marriott in Atlanta. The case presented a complicated array of issues ranging from architectural and professional engineering responsibilities, professional standards to be exercised in the field of geotechnical engineering and municipal responsibility for negligent acts. After years of litigation, the case was resolved for a favorable settlement amount shortly before trial.

Nick, along with his partner Glenn Kushel, served as lead counsel in a negligent security case against the Metropolitan Atlanta Rapid Transit Authority (MARTA). The firm’s client was stabbed at the Peachtree MARTA Station and having been offered nothing prior to trial, the case was tried successfully to a verdict of one million dollars. In addition, the firm recently settled another matter against MARTA involving a bus accident that rendered the plaintiff a quadriplegic.

Nick was honored to recently serve as co-lead counsel in a significant case involving the shooting of a 93 year old woman by several Atlanta Police Department Narcotics Investigators. Acting upon a warrant obtained with false information, a team of Atlanta Police Officers and Investigators burst into the home of this law abiding citizen, fatally shooting her and eventually planting drugs in her home. Subsequent to this activity, a number of officers within the department covered up the truth until a confidential informant eventually went to the FBI. Suit was filed against the City of Atlanta, the Atlanta Police Chief and others seeking damages for violation of the deceased’s constitutional rights, resulting in her death. After three years of aggressive litigation in Federal Court, the case was settled favorably for $4,900,000.00. The Narcotics Division of the Atlanta Police Department was disbanded, several Officers and Investigators were dismissed and four Investigators were sentenced to significant time in Federal Prison.

Nick has litigated many cases in State, Superior and Federal Courts to successful conclusion including automobile accidents, trucking accidents, and premises liability cases. He has also served as lead counsel for presentation of oral argument in many cases before the Georgia Court of Appeals and Georgia Supreme Court.

Nick has always been active outside of the practice of law. He has served as Legislative Chairman of the Georgia Trial Lawyers Association and was a member of the Executive Committee. In 2002, he was elected to the Georgia Legislature where he served as Chairman of the General Law Subcommittee of the Judiciary Committee of the House of Representatives.

Nick and his wife Effie have been married since 1979 and are fortunate to have two beautiful daughters.